What Are Total Solar Eclipses?

Total solar eclipses happen when the New Moon comes between the Sun and Earth and casts the darkest part of its shadow, the umbra, on Earth.

During a total eclipse of the Sun, the Moon covers the entire disk of the Sun. In partial and annular solar eclipses, the Moon blocks only a part of the Sun.

Animation: Next eclipse in your city

There are five stages in a total solar eclipse:

Never look directly at the Sun, eclipsed or otherwise, without proper protective eyewear. The Sun’s radiation can burn your eye's retinas and cause permanent damage or even blindness.

To safely watch a solar eclipse, wear protective eclipse glasses or project an image of the eclipsed Sun using a pinhole projector.

Only Safe during Full Eclipse

It is safe to view a fully eclipsed Sun, totality, with the naked eye. It is also safe to observe totality through cameras, telescopes, or binoculars without any special filters. Do not look at the Sun with naked eyes unless the Moon blocks the entire Sun. Even a small amount of direct sunlight can damage your eyes. Make sure you know how long totality lasts in your location.

These events then repeat in reverse order: First, the Sun's chromosphere reappears just before totality ends. The Baily's beads follow this as the Moon continues to move away. The diamond ring and corona then makes an appearance, following which shadow bands reappear before the crescent Sun is visible again.

The Science of Total Solar Eclipses

On average, one total solar eclipse happens every 18 months, when:

Not Every New Moon

For a solar eclipse to occur, the New Moon must be at or very close to one of the two points where the orbital planes meet. These locations are called lunar nodes.

If the Moon is not near a lunar node during New Moon, the Sun, Moon, and Earth do not align in a straight or almost straight line, and a solar eclipse cannot occur. Seen from Earth, the Moon passes just above or just below the Sun (see image).

The Moon's path around Earth is elliptical, with one side of the orbit closer to Earth than the other. The point closest to Earth is called the perigee and the side farthest from Earth is known as the apogee.

Earth's orbit around the Sun is also elliptical, with the Sun closest at perihelion, and farthest away at aphelion.

What if the Moon is near apogee?

How Long Does Totality Last? 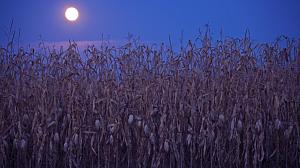