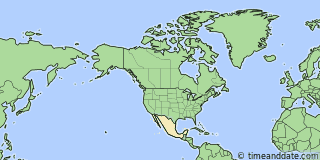 When Does DST Start and End in Mexico?

In most of Mexico, including its capital Mexico City, Daylight Saving Time (DST) runs from the first Sunday of April to the last Sunday of October. However, there are several exceptions:

The state of Baja California introduced seasonal clock changes in 1931, remaining the only area in Mexico with a DST schedule for 65 years. In the rest of the country, DST was introduced in 1996.