At 16:20 UTC on Monday, January 26, 2015, asteroid 2004 BL86 flew by Earth at a distance only 3 times greater than the distance between Earth and Moon. People in North and South America, Europe and Africa will have front row seats for the event.

All you will need to see this space rock is a small telescope or a pair of strong binoculars!

Due to time zone differences, the event will occur on Tuesday, January 27, 2015 at locations following a time zone of UTC+8 or more.

10 Things About Asteroids You Must Know

According to astronomers, at its closest point the asteroid will be around 745,000 miles (1.2 million km) from the Earth’s surface. This is about 3.1 times the average distance between the Moon and the Earth.

2004 BL86 was discovered in 2004 by the Lincoln Near-Earth Asteroid Research or LINEAR, a collaboration between NASA, the United States Air Force and the Massachusetts Institute of Technology's Lincoln Laboratory.

Count down to 2004 BL86's closest approach to Earth

2004 BL86's close encounter will provide a rare opportunity for amateur astronomers to view the asteroid, since according to NASA, 2004 BL86 will not come this close to the Earth for the next 200 years.

At its closest approach, 2004 BL86 won't be visible to the naked eye but observers with small telescopes and powerful binoculars will be able to view it.

Observers in North America, South America, Europe and Africa will have the best view of the asteroid flyby. Those in East Asia and Australia will have a chance to see the asteroid, but will require stronger equipment since the asteroid will be less bright while passing over these regions.

Will the weather in my city allow me to see the flyby?

To view the asteroid, astronomers suggest that viewers look towards the constellations of Hydra, Cancer and Leo.

Should I be worried?

Absolutely not! Scientists around the world have ruled out any possibility of the asteroid hitting the Earth – 2004 BL86 is expected to safely sweep by the Earth on January 26. 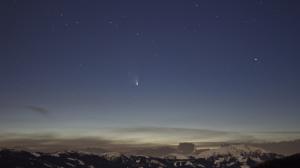 Comets are small celestial bodies that orbit the Sun. Primarily made of dust and ice, many have a tail (coma) and are thought to be remnants of the formation of the Solar System.