When Is Memorial Day 2022 in Newfoundland and Labrador?

Memorial Day is observed together with Canada Day in the Canadian province of Newfoundland and Labrador on July 1 each year. Memorial Day commemorates the brave efforts of the province’s veterans, particularly those who participated in World War I.

Is Memorial Day a Public Holiday?

Memorial Day is a public holiday in Newfoundland and Labrador, where it is a day off for the general population, and schools and most businesses are closed.

Memorial Day coincides with Canada Day celebrations, which are festive and joyous. However, many people in Newfoundland and Labrador take a moment, particularly early in the day, to remember the contributions made by the province’s veterans, particularly those who served and those died during World War I.

Events to mark Memorial Day include wreath laying ceremonies at memorials. Community and political leaders are often seen at these events and may give speeches to inform people about the day’s importance. Memorial Day has been observed at the National War Memorial in the city of St John’s in recent years. The Union Flag, also known as the Union Jack, may be seen flying at half staff on Memorial Day in Newfoundland and Labrador.

Memorial Day falls on the same day as Canada Day, which is a national public holiday in Canada. Government offices, post offices, educational institutions and many businesses are closed. Some stores, pharmacies, and gas stations may be open.

Parking and traffic conditions may be busy in areas where Memorial Day services are held. Those planning on using public transport on this holiday may need to check with the local transport authorities prior to travelling.

Memorial Day commemorates Newfoundland and Labrador’s veterans, especially the members of the Newfoundland Regiment who fought and died at Beaumont Hamel during the opening day of the Battle of the Somme on July 1, 1916. According to Veteran Affairs Canada, Newfoundland was a dominion of the British Empire and not yet a part of Canada during World War I (1914–1918). Once Britain declared war on Germany in August 1914, Newfoundland was automatically at war.

The “1st Newfoundland Regiment” was assembled and trained, with the first recruits sent overseas in October, 1914, to become a unit of the British Army. They would become known as the “Blue Puttees” because of the color of the uniform leggings they wore on their lower legs. After seeing action in the Gallipoli campaign in Turkey in late 1915, the Newfoundlanders were sent to France’s western front in 1916. The Allied plan was to make the “Big Push” and the Somme was chosen as the site for a joint French and British assault.

It would be on the first day of the Battle of the Somme, near the village of Beaumont-Hamel in northern France, that the 1st Newfoundland Regiment would enter the action. The result was devastating – more than 57,000 British and Commonwealth soldiers were killed, wounded or missing. The sector of the front in Beaumont-Hamel where the 1st Newfoundland Regiment would see action was supposed to be taken by surprise, but the Germans knew the attack was coming.

The Beaumont-Hamel Newfoundland Memorial is a memorial site dedicated to remembering the Dominion of Newfoundland force members who were killed during World War I. It is located in nine kilometers north of the town of Albert in France. The site is one of the few in France or Belgium where a visitor can see the trench lines of World War I battlefield and the related terrain. A great bronze caribou stands on a mound that is surrounded by rock and shrubs native to Newfoundland. The caribou is the Newfoundland Regiment’s emblem.

At the base of the mound, three bronze tablets carry the names of 820 members of the Royal Newfoundland Regiment, the Newfoundland Royal Naval Reserve, and the Mercantile Marines who gave their lives in World War I and have no known grave. Many of the soldiers were later found and buried in nearby Commonwealth War Graves Commission cemeteries.

The National War Memorial in St John’s, Canada, is another memorial that remembers World War I veterans and those who died while in service during the war. There are five bronze figures that represent Newfoundland's involvement in the war. A figure of a woman is at the top of the central pedestal. It symbolizes Newfoundland's willingness to serve and the spirit of loyalty to the Empire. The figure holds a flaming torch in her left hand as a symbol of freedom. She holds a sword in her right hand, signifying readiness for battle if necessary. This memorial was unveiled on July 1, 1924.

Note: Timeanddate.com wishes to thank Veterans Affairs Canada for information regarding the 1st Newfoundland Regiment, the Battle of the Somme, and the Beaumont-Hamel Newfoundland Memorial.

Veterans Affairs Canada: The 1st Newfoundland Regiment and the Battle of the Somme

Tell and listen to jokes all day long to celebrate this rib-tickling holiday. More 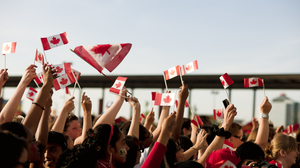