New Year's Eve (Oíche Chinn Bliana) is the last day of the year in Ireland. People mark the occasion by cleaning their homes, stocking up on supplies and holding parties.

Even though New Year's Eve falls on Saturday, December 31, 2022, it is a working day. Most businesses follow regular opening hours in Ireland.

Many people go to dinners, parties or galas in private homes, pubs or hotels in the late afternoon or early evening. Many of these events feature some kind of countdown to midnight and the New Year. At the stroke of midnight, there may be fireworks, short parades or performances by traditional musicians. Many parties then continue into the early hours of January 1.

Although people generally have to work on New Year's Eve, many take some of their annual leave on this day and the days surrounding it. Hence, it is a popular period to visit relatives and take a short vacation in Ireland or abroad.

According to old tradition, people in the past cleaned their homes, put fresh sheets on their beds and stocked up on food and other household supplies in the last days of December. They hoped that this will give them a fresh and prosperous start to the New Year.

New Year's Eve is not a public holiday. However, banks, post offices, stores and other businesses may close earlier than usual. Many restaurants, pubs and clubs are only open to people with invitations or tickets. People wishing to spend some or all of the evening in a particular venue are advised to check details of the event and reserve a ticket well in advance. Public transport services generally run as usual. However, they may be reduced or stop in the late afternoon and evening.

Winter celebrations have been held in Ireland for thousands of years. These marked the end of the fall harvest season and the darkest part of the year. People celebrated by holding feasts, social events and lighting fires to bring light into the dark. These customs are still seen in modern New Year's Eve celebrations in Ireland. Now, December 31 is also the last day of the tax year in the Republic of Ireland.

Other Holidays in December 2022 in Ireland 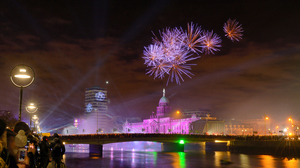 New Year's Day is the first day of the year. It is a public holiday in the Republic of Ireland.