What Is Polar Night?

Polar night is the opposite of midnight sun, when none of the Sun's disc is visible above the horizon at all. It only happens within the polar circles.

The opposite of polar night is midnight sun or polar day.

Polar nights occur in the polar regions during the winter months:

As the polar region tilts away from the Sun during the winter, even areas that are on the Earth's day side do not receive any direct sunlight as the Sun stays below the horizon.

The start of polar night at the South Pole

Where Can You See a Polar Night?

Polar nights occur in many populated areas of the Northern Hemisphere. Although Norway promotes itself as the Land of the Midnight Sun, you can also see it in parts of Alaska, Canada, Greenland, Finland, Russia, and Sweden.

The only landmass far enough south in the Southern Hemisphere to have polar nights is Antarctica.

Starts Around the Equinox

At the North Pole, the polar night begins as the Sun sets around the Autumnal (Fall) Equinox in September. It lasts for about 6 months until the Sun rises again around the Vernal (Spring) Equinox in March when 6 months of Polar Day / Midnight Sun begin.

As the Sun gradually dips further below the horizon at the North Pole after the September Equinox, the area experiencing polar night gradually grows southwards until it encompasses nearly all of the Arctic Circle around the December Solstice.

After the Winter Solstice in December, the polar night area recedes again, moving north towards the North Pole. Around the Spring Equinox in March, the Sun finally rises again at the North Pole, ringing in a Polar Day lasting about 6 months.

Opposite in the Southern Hemisphere

In the Southern Hemisphere, it's opposite. There, areas within the Antarctic Circle experience Polar Days when the Northern Hemisphere has polar nights.

Why Not on the Polar Circles?

In locations just inside the Arctic Circle, there may be no polar night around the December Solstice. For example, in Gällivare, Sweden there is never a 24-hour night, even though the city is about 60 miles (100 km) north of the Arctic Circle.

The other reason is refraction – the fact that light bends when it hits the Earth's atmosphere. Refraction makes the Sun visible above the horizon several minutes before it actually gets there, so a small portion of the Sun's disk may be seen even in areas just within the polar night region.

Even in regions well within the polar circles, polar nights are not necessarily completely dark because the Sun might be just below the horizon around noon, producing twilight. 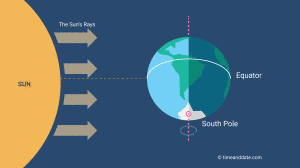 The Sun shines directly on the Equator on the September equinox and the length of day and night is nearly equal, but not quite. 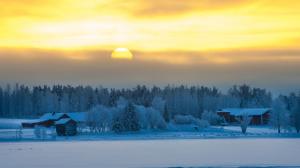