Christmas Eve in Canada is the last day of preparations for the Christmas Day and Boxing Day holidays. It is a busy shopping day and some people give gifts to family and friends on this day.

Christmas Eve 2022 is a statutory holiday in New Brunswick and an observance in 12 provinces and territories.

Many people in Canada have to work on Christmas Eve, but it is also a day of preparation for the approaching holidays. Some people buy last-minute Christmas gifts for family members and friends while others wrap presents that they bought earlier. If a family is going eat a traditional meal on Christmas Day, they may begin preparations on Christmas Eve.

A traditional Christmas Day meal often consists of roast turkey or goose with squash, turnips, potatoes and cranberry sauce as a main course and mince pies or plum pudding for dessert. However, people may eat dishes as diverse as clam chowder, spiced chicken wings or traditional food from the wide range of cultures represented in modern-day Canada.

Many families put up their Christmas tree and other decorations on Christmas Eve. However, some do this earlier in December and just save a few special decorations, perhaps representing the Nativity, to put on display on December 24. In some areas, a large Nativity scene, perhaps with live animals or actors playing the parts of Mary and Joseph, is set up on Christmas Eve.

People who attend church regularly may go to a church service on the evening of December 24, known as midnight mass. Traditionally, this service started at midnight as December 24 became December 25 but now often starts earlier in the evening. In Quebec the traditional meal after this service is a pie of meat, potatoes and onions known as tourtire (tortiere, tourtier).

Some families, particularly in Quebec, may exchange gifts in the evening of Christmas Eve. However, many others, particularly those with small children, end the day by hanging up large socks or sock-shaped sacks known as Christmas stockings. Children are told that a mythical figure called Santa comes to fill them with presents during the night. The story of Santa is so important to Christmas in Canada and the United States that the North American Aerospace Defense Command (NORAD) maintains a website to allegedly 'track' Santa's movements on Christmas Eve.

December 24 is not a public holiday in Canada and general post offices, stores and other businesses are open. However, they may close earlier than usual to allow employees time to travel to the homes of family members. Public transit services usually run as usual in the morning and early afternoon but may offer a reduced service or close down completely in the late afternoon or early evening. There may be congestion on roads and airports and other public transit hubs may be very busy as people travel to visit friends or family members.

Early European settlers in Canada came from a wide variety of cultural and religious backgrounds. People from each country and region in Europe who moved to Canada often brought their own customs centered on marking the birth of Jesus at Christmas. Present day celebrations consist of a mixture of these customs and the commercial influences that began in the late 1800s and continue today.

Traditional Canadian Christmas decorations include natural objects such as fresh or dried cranberries or other berries, locally scavenged nuts or pine cones, feathers and branches from locally growing evergreen bushes and trees. Modern Canadian Christmas decorations may be similar to those in other countries, such as Nativity scenes, evergreen trees, Santas, snowflakes, bells and stars. However, they may also use representations of Canadian symbols, such as the red maple leaf found on the Canadian Flag, the Canada goose, the loon (a small water bird) or a Mountie (a Royal Canadian Mounted Police officer) in traditional red uniform. 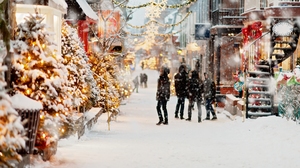 Christians celebrate the birth of Jesus Christ on Christmas Day in Canada. 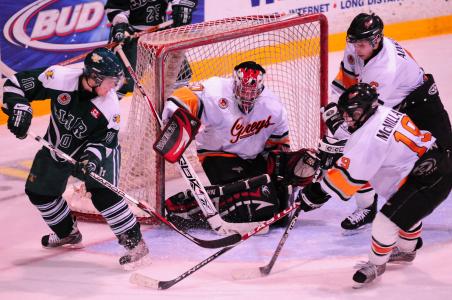 Day off for Boxing Day

The day after Christmas Day is known as Boxing Day and is a holiday in many parts of Canada.