New Year’s Day in Turkey starts with fireworks after the traditional countdown at the end of the New Year’s Eve. Celebrations usually last until dawn and many people use the day off on January 1 to relax and visit friends and relatives.

People living in big cities in Turkey traditionally celebrate the New Year in city squares, from where they can watch fireworks at midnight between New Year’s Eve and New Year’s Day. Small-town residents often try to come to bigger cities for the celebrations. In Istanbul, for example, many residents and visitors participate in festivities at Taksim Square.

New Year’s Eve generally ends with a countdown, but parties and street performances last until dawn. Late celebrations are also common for house parties with friends and relatives and festivities at hotels and restaurants. The morning of January 1 is usually quiet. People who celebrated the New Year’s Eve in out-of-town locations, such as ski resorts, generally start returning home in the late afternoon. It is also common for people to visiting relatives and friends who were not around them on December 31 and for people to exchange small gifts to each other.

New Year’s Day is a public holiday and is generally a quiet day in Turkey on January 1. All administration buildings, schools and post offices, as well as most businesses are closed on this day. Public transport may run less frequently than usual because fewer people need to travel on this day. Highways may be overcrowded in the late afternoon because many people may be returning from out-of-town holiday centers.

Turkey replaced the solar-based Islamic calendar (Rumi takvim), used in the Ottoman Empire, with the Gregorian calendar in 1926. Between 1926 and 1934 the New Year’s celebrations were held on the first weekend after January 1. As part of Turkey’s westernization program in the 1920s, this country borrowed many of today’s New Year’s traditions from Christmas, including Santa Claus, a fir tree and pine decorations. New Year’s Day became a public holiday in Turkey in 1935.

The New Year’s tree, which is identical to Christmas tree in Christian countries, as well as images of Noel Baba (the Turkish name for Santa Claus) are the most common symbols of New Year’s Day in Turkey. 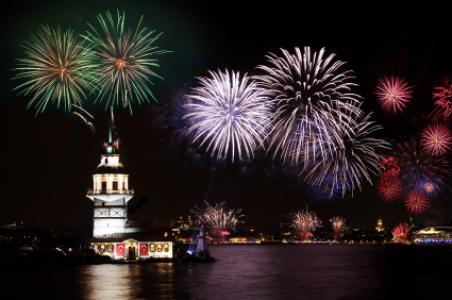 New Year’s Eve in Turkey, which is December 31 in the Gregorian calendar, marks the end of a calendar year.