New Year’s Eve is one of the most popular holidays in Turkey. The New Year’s Eve traditions in this country include a family dinner, a national lottery drawing and a countdown to midnight. New Year’s Eve falls on December 31 in the Gregorian calendar.

Even though New Year's Eve falls on Saturday, December 31, 2022, it is a working day. Most businesses follow regular opening hours in Turkey.

Hotels, restaurants and nightclubs offer special entertainment programs on New Year’s Eve. Most places require early reservations. Some people go to city centers late on December 31 to watch the traditional fireworks. New Year’s Eve ends with a countdown to announce the arrival of a new year, and celebrations continue until the morning of January 1.

New Year’s Eve is not an official holiday, although many workers get half a day off. Administration buildings, schools and post offices may be closed in the in the afternoon of December 31. Supermarkets may also close earlier than usual. Many people celebrate New Year’s Eve in city centers, so traffic may be intense in the evening of December 31.

December 31 became the last day of a calendar year in Turkey in 1926 when this country started using the Gregorian calendar. Turkey and the Ottoman Empire used a solar-based Islamic calendar (Rumi takvim) prior to 1926. New Year’s Eve became a popular holiday in Turkey after the Turkish parliament made January 1 (New Year’s Day) an official holiday in 1935. Turkey has borrowed many of New Year’s Eve traditions from western celebrations of Christmas and Thanksgiving during the 1920s and 1930s.

The common symbols of New Year’s Eve in Turkey are:

These symbols can be seen on New Year’s Eve in Turkey. 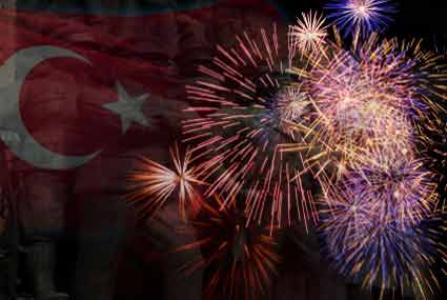 New Year’s Day in Turkey falls on January 1 in the Gregorian calendar and marks the beginning of a new calendar year.