Eid ul-Adha in the Islamic Calendar

Eid ul-Adha is celebrated on the 10th day of Dhū al-Hijjah, the twelfth and final month of the Islamic calendar. Traditionally lasting for four days, the first day of Eid ul-Adha marks the end of the yearly Hajj pilgrimage to Makkah.

Is Eid ul-Adha a Public Holiday?

While Eid ul-Adha is an important celebration for Muslims, there are no bank holidays associated with this particular date in the United Kingdom. However, since the Gregorian date of Muslim holidays changes every year, Eid ul-Adha can fall on other UK bank holidays.

Mosques are likely to be busy, and this may lead to some traffic congestion. Some Muslims choose to take one or more days of annual leave at this time.

Eid ul-Adha in the UK

On Eid ul-Adha, Muslims in the UK usually start the day by performing ghusl, a full-body purification ritual. They then dress in their finest outfits and attend a prayer service at an outdoor prayer ground or the local mosque. Afterward, it is customary to embrace and wish each other Eid Mubarak, which translates as “have a blessed Eid,” give gifts to children, and visit friends and relatives.

One of the central rituals on Eid al-Adha is Qurbani, the act of sacrificing a sheep, goat, or cow. According to Islamic rules, the animal must be an adult and in good health, and British law additionally mandates that the animal must be killed in an official slaughterhouse. The meat is then divided between family, friends, and the poor. Other Muslims give money to charity to give poorer families the chance to have a proper Eid feast. Mosques or other groups may arrange communal meals.

Eid ul-Adha has a celebratory character, and the day may be rounded off by visiting funfairs or festivals held for the occasion in some British cities.

Initiatives to improve the quality of life or opportunities in Muslim communities around the United Kingdom may be launched on Eid ul-Adha. Some mosques also hold study days or lectures on aspects of Islam and Islamic history.

In contrast to Eid ul-Fitr, which is nicknamed the “Sweet Eid” for its variety of sweet dishes, Eid ul-Adha is often called the “Salty Eid” because the feast includes mainly savory food. While the composition of the feast in the UK largely depends on the cultural background of the family, the main ingredient is usually the meat from the slaughtered animal: mutton (adult sheep), chevon (adult goat), or beef (adult cattle).

Popular dishes include Kebab (boneless cooked meat), Haleem (a stew usually made from meat, wheat, and lentils), and Biryani (a spicy meat and rice dish originally from India). The meal is usually rounded off by a sweet dessert, featuring cakes, biscuits, or sweet pastries like Turkish baklava.

The Meaning of Eid ul-Adha

On Eid ul-Adha, Muslims around the world celebrate Ibrahim's complete obedience to the will of God. According to Islamic tradition, Ibrahim (Abraham) agreed to sacrifice his son Ishmael when God ordered him to do so. However, just as Ibrahim was about to kill Ishmael, God put a sheep in his place.

Who Celebrates Eid ul-Adha in the UK?

Other Holidays in June 2023 in the United Kingdom

Take your camera out and take some pictures on Camera Day. More 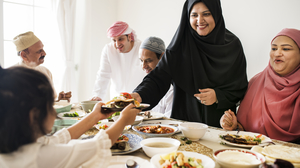 Eid ul-Fitr is a Muslim celebration that marks the end of the month-long fast of Ramadan.