When Is Prince Jonah Kuhio Kalanianaole Day 2023 in Hawaii?

Festivals may feature statewide canoe races, cultural demonstrations, and luaus. A luau it is a way to celebrate a variety of occasions and includes music, dance, games, and food. Health organizations actively participate in the month-long Prince Kuhio celebrations as a way of increasing people’s awareness on health issues. Many people also commemorate Prince Jonah Kuhio Kalanianaole Day by attending special services at Oahu’s Royal Mausoleum, where Prince Kuhio is buried.

Prince Jonah Kuhio Kalanianaole Day remembers Prince Jonah Kuhio Kalanianaole’s life and his efforts to improve people’s lives in Hawaii. Prince Kuhio was born on the island of Kauai in 1871. He was Queen Liliuokalani’s cousin and she named him to be an heir to the throne so he was given the title of “prince”. He studied in California and at the Royal Agricultural College in England. He was 24 years old when he joined the Royalist uprising against the new republic in 1895 and was captured and convicted of treason.

Prince Kuhio later worked with the industrialists who overthrew the monarchy, believing that cooperation would bring political power that could help his people more than resistance would. He ran for the office of territorial delegate to the US congress and won. He was also re-elected 10 times. He focused on developing Pearl Harbor and Honolulu Harbor, regular mail delivery and the “back to the farm” movement during his tenure.

He is best remembered for his successful effort to get congress to pass the 1920 Hawaiian Homes Commission Act to provide homesteads for native Hawaiians. He also introduced a bill in 1919, which requested that Hawaii be admitted into America as a fully fledged state. Hawaii became the 50th state in 1959. Prince Kuhio died in Waikiki, near Honolulu, on January 7, 1922, and a holiday was created to honor him in 1949.

Various landmarks, including streets, beaches and buildings, in Hawaii are named after Prince Jonah Kuhio Kalanianaole. Various paintings and photographs of Prince Kuhio are still used in promotional material and information about Prince Kuhio and a statue in his likeness is found just off Kalakaua Avenue in Waikiki.

Other Holidays in March 2023 in the United States

Make Up Your Own Holiday Day

The made-up holiday encourages people to make up their own holiday. More

Whip up a big pan of this delicious rice dish that originated in Valencia, Spain. More 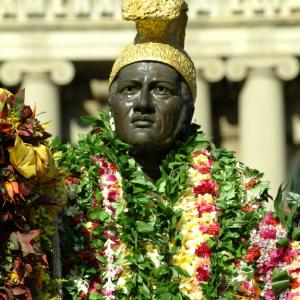 Kamehameha Day, held annually on June 11, honors Kamehameha the Great (Kamehameha I), the monarch who united and established the Kingdom of Hawaii.