New Year's Day (Jour de l'an) is the first day of the year in the Gregorian calendar. It is a public holiday in France. Many people spend the day quietly in the company of friends or family.

In 2023, it falls on a Sunday, and some businesses may choose to follow Sunday opening hours.

Many people in France start New Year's Day at midnight while celebrating with friends or family members. Public and private fireworks displays are common. Many people drink champagne, sparkling white wine or hot wine (vin chaud). People may also sing songs such as The song of a New Year (Chanson du nouvel An) and an adaptation of the Scottish Auld Lang Syne (Choral des Adieux) written by Robert Burns to mark the start of the New Year at midnight. People generally spend the rest of the day quietly.

There is a special tradition in Viella, a village in the Hautes-Pyrénées region close to the Spanish border. A church service is held late in the evening on New Year's Eve. Afterwards, people walk to the vineyards in a torchlight procession. The grape harvest begins at midnight. A strong, sweet wine is made from the grapes that have matured naturally on the vines. Bottles of this wine are specially marked to show that the grapes were harvested on January 1.

Public life is generally quiet in France on January 1. Post offices, banks, stores and other businesses are closed. Outside of tourist areas, restaurants and cafes may be closed. However, some stores in Paris, as well as at airports and railway stations and along major highways, may be open. Public transport service schedules vary depending on where one lives and intends to travel.

Midwinter celebrations have been held in the area that is now France for thousands of years. These have evolved into the modern Advent, Christmas, St Stephen's Day, New Year's Eve, New Year's Day and Epiphany celebrations. New Year's Day is celebrated in other countries including in Australia, Canada, Germany, the Netherlands, the United Kingdom and the United States.

Certain types of cake and tart are associated with New Year's Day and the first half of January. These include heart shaped cakes (le coeur de l' an) and log shaped 'cakes' made of ice cream (gateau glacé). These cakes are often decorated with symbols of the winter season and good luck charms for the coming year, such as birds, evergreen trees, bells, golden balls and chocolate coins.

King's cake (la galette des rois) consists of a puff pastry case filled with frangipane. Frangipane is made with eggs, sugar, butter and ground almonds. The cakes are sold with a paper crown on top. A dried bean, small coin or ceramic figure is hidden in the filling. The person who finds the bean, coin or figure in their portion is 'king' for the day and wears the paper crown. 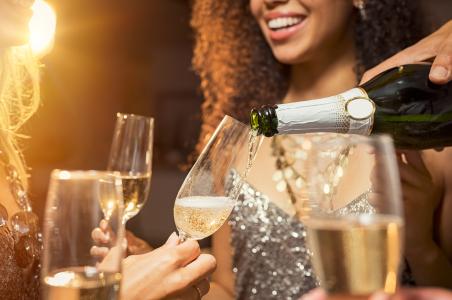