Many Christians in the United Kingdom celebrate Trinity Sunday, which is the first Sunday after Pentecost. It is one of the few feasts that are celebrated as a doctrine instead of an event. It is also symbolic of the unity of the Trinity.

Is Trinity Sunday a Public Holiday?

Trinity Sunday is not a public holiday. It falls on Sunday, June 12, 2022 and most businesses follow regular Sunday opening hours in United Kingdom.

Many Christian churches in the United Kingdom observe Trinity Sunday through various activities, including special church services that focus on the theme of the trinity. Such services give the congregation a chance to learn about or revisit the concept of the trinity, which refers to the Father, Son and Holy Spirit being one God. The Athanasian Creed, named after St Athanasius, Archbishop of Alexandria, is often included in church services on Trinity Sunday because of its strong affirmation of the Triune nature of God.

Many churches or Christian organizations that run Sunday schools may also have special lessons that teach children about the trinity. Sunday school activities may include songs, poems, group discussions, and coloring tasks.

Trinity Sunday is not a bank holiday in the United Kingdom.

Pope Gregory IX instituted Trinity Sunday in 828 CE. This day is known for being the only major Christian festival that celebrates a church doctrine rather than an event in its sacred history. It is dedicated to the Christian belief in the Trinity – Father, Son and Holy Spirit – and falls on the Sunday following Pentecost each year. The belief of one God in three elements is a distinctive of the Christian faith but the early church was plagued by contrary views. Trinity Sunday spread throughout the western church around the 14th century CE.

In some churches, the liturgical color is white on Trinity Sunday. Images of the Trinity of the Father, Son and Holy Spirit depict that there are three elements of one God. The Trinity is sometimes symbolized by a triangular shape formed by three overlapping oval rings or loops, each featuring the one of the following images: the crown (father) within the top loop; the lamb (son) within the second loop (clockwise); and the dove (spirit) within the third loop (clockwise). Other shapes depicting the Trinity include Borromean rings and the triquetra.

The Borromean rings feature three overlapping round circles forming a triangular shape, and in the center, inside all the circles is the word "unitas". The Borromean rings are named after the crest of the Borromeo family in 15th-century Tuscany.

The triquetra symbol uses shapes similar to one of the oldest Christian symbols. In the triquetra, the three equal arches of the circle express the equality of the Father, Son, and Holy Spirit. The union of the arches represents the unity of the Godhead. Their continuous form symbolizes eternity. Their interwoven appearance denotes the indivisibility of the Trinity. In the center of the triquetra is an equilateral triangle, the most ancient of the Trinity symbols, and each pair of arches formed an ellipse, the symbol of God’s glory.

About Trinity Sunday in Other Countries

Other Holidays in June 2022 in the United Kingdom 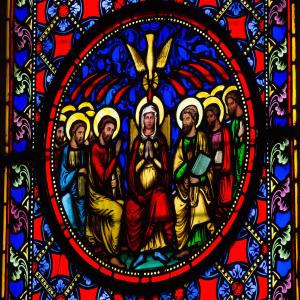