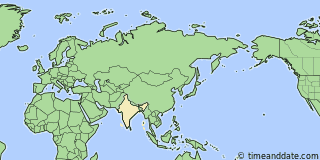 One Time Zone in India

India has only one time zone. The country has officially observed India Standard Time (IST) since 1947. However, the UTC+5:30 offset has been used as the local standard time in India since 1906.

India is a large country that stretches almost 3000 kilometers (1864 miles) from west to east. It spans nearly 30 degrees longitude (68°7'E to 97°25'E). If the country were to base its time zones on mean solar time, it would have three time zones, but since it only has one, the Sun rises almost 90 minutes earlier in Guar Mota in the east than in Dong in the far west.

Tea Garden Time is an informal time zone used in India's northeastern state Assam. There the clocks are unofficially set one hour ahead of IST (UTC+6:30). In this part of the country, sunrise can come as early as 4:00 (4 am) IST in the morning and sunset at 16:00 (4 pm) IST in the afternoon.

Tea Garden Time, translated as “Chai Bagan Time,” was introduced by the British tea companies to increase daylight work hours and thus productivity and is still in use today.

There are a few drawbacks of keeping the one time zone. As seen from the tea gardens, early sunrise causes loss of sleep and productivity in locations with less daylight hours, and early sunset can lead to higher energy consumption. But for now, it seems like the drawbacks of one time zone do not outweigh the benefits of two.

In 2018, the CSIR-National Physical Laboratory (CSIR-NPL) and the National Measurement Institute (NMI) of India proposed implementing two time zones in India: IST-I (UTC+5:30) and IST-II (UTC+6:30) in the northeast. The implementation has yet to be legally formalized.

India had multiple time zones in the past. In 1802, British astronomer John Goldingham at the East India Company established time in Chennai as GMT+5:30.