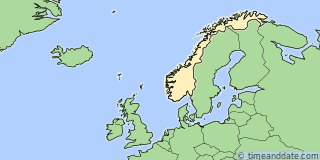 How Many Time Zones Are There in Norway?

Norway has only one time zone. The country has observed the same local time as standard time since time was standardized there in 1895.

Troll Station follows a different local time during parts of the year. Norway's only Antarctic research outpost has two clock changes per year, alternating between GMT and CEST.

Time Zone Not Currently Being Observed in Norway