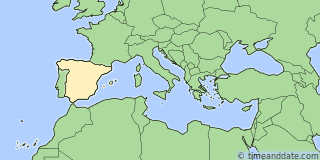 How Many Time Zones Are There in Spain?

All of continental Spain, including the capital Madrid, observes the same time zone. However, the Canary Islands, off the coast of Morocco, add a 2nd time zone to the country. Here, the local time is 1 hour behind the mainland.

Time Zones Not Currently Being Observed in Spain

The above time zones are used during other parts of the year. They will become active again after the next clock change as Daylight Saving Time begins or ends.

In terms of geography, it would make more sense if continental Spain observed the same local time as the Canary Islands. In fact, the country did so for decades—from 1900, when time zones were introduced there, to 1940, when the dictator Francisco Franco moved Spain to the time zone it uses today.