Home   Sun & Moon   A Handy Guide to Measuring the Sky

A Handy Guide to Measuring the Sky

Did you know that you can measure the distances between objects in the sky with just your hands and fingers?

Because of this, astronomers measure the distance between celestial objects based on the angle they make with an observational point on Earth. Known as angular distances or angular separation, distances are expressed in terms of degrees (°), arc minutes ('), and arc seconds (").

While angular separation primarily describes the apparent distance between celestial objects, as seen from Earth, it can also be used to suggest their actual distance from one another.

Imagining Angles in the Sky

Like our modern-day timekeeping, the angular method is based on a sexagesimal system – a numeral system with 60 as its base. There are 360° in a circle or sphere, each degree is divided into 60' and each arc minute is further divided into 60".

A “Handy” Way to Measure Distances

Hold your hand at arm’s length and close one eye.

It is important to note that such measurements are approximate – not everyone has the same sized hand.

With these simple measuring rules in your hand, you can not only understand basic stargazing jargon but also tell other budding stargazers where to look for a specific celestial object in the sky.

Angular size or angular diameter of a celestial object is the angular separation between opposite edges of the object. The Sun and the Moon are the only objects in the sky whose angular size is visible to the naked eye.

Remember to never look at the Sun directly without any eye protection!

If you are in the Northern Hemisphere, you can use your hands to find your current location’s latitude. To do this, stretch your hands in front of you and measure the angle between the visible horizon and the North Star. This angle is your latitude in degrees.

Unfortunately, there is no bright star equivalent to the North Star in the Southern Hemisphere. 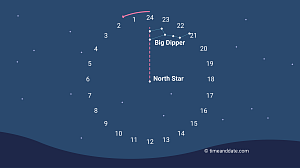 Out and about at night without a watch or a smartphone readily available? If you are in the Northern Hemisphere use the Big Dipper and the North Star to tell the time.