The Equator Divides Earth in Two

The equator is an imaginary line between the Northern and Southern Hemispheres. It divides the globe in half at 0 degrees latitude.

What is the Equator?

The equator is an imaginary line dividing Earth into the Northern and Southern Hemispheres. It is located halfway between the North and South poles.

13 Countries Along the Equator

The equator passes through 13 countries:

We use a grid of lines known as latitude and longitude to map the Earth’s surface.

Circles of latitude wrap around the planet from east to west, while lines of longitude go from north to south.

11 of the countries are in direct contact with the equator, while it runs through the territorial waters of Kiribati and the Maldives.

Countries along the equator don’t have traditional seasons like spring, summer, fall (autumn), and winter. Generally speaking, regions around the equator have wet and dry seasons.

The Northern and Southern Hemispheres tilt toward and away from the Sun at opposite times of the year. This tilt of Earth’s axis is known as axial tilt and is the reason why we have seasons in the north and south of Earth.

The weather at the equator isn’t affected by the axial tilt. There, the Sun’s roughly directly above every day, giving stable and warm temperatures year-round. However, like in the rest of the world, local differences occur, and factors other than the longitude determine the climate and weather.

The Sun’s Movement Across the Sky

Imagine Earth’s equator extending into space. This is the celestial equator: an imaginary circle dividing one celestial sphere from another at an equal distance from the poles.

The word equator is derived from the medieval Latin aequator, from the phrase circulus aequator diei et noctis, meaning ‘circle equalizing day and night,’ and from aequare, which means ‘make equal.’

Around the equator, the Sun–more or less– rises vertically and passes directly overhead.

Twice a year, on the March and September equinox, the Sun passes precisely over the equator. This means that when the Sun is at its highest point in the sky, known as the zenith, it will be directly overhead.

At that perfect time of the equinox–when the Sun is both directly overhead and at its highest in the sky–the shadows of everything on the ground disappear!

If you can picture yourself standing on the equator with the Sun directly above on the day of the equinox, you’d have only a tiny sliver of your shadow beneath you.

The only reason there will be ‘some’ shadow is that our bodies are uneven, but if you set up a long and even pole, the Sun would shine directly at the top, and the pole wouldn’t make a shadow at all.

The Sun: our home star

Day and night are approximately the same length along the equator: around 12 hours of daytime and 12 hours of nighttime. However, the days are a few minutes longer than the night.

There are two reasons why the day is a few minutes longer than the night:

Equilux: Day and night the same

We are all looking at the same Moon, but the most apparent difference between the hemispheres is the orientation of the lit-up side of the Moon as it goes through its phases.

At the equator, the bottom sliver of the Waxing Crescent Moon is illuminated, and the Moon sets as a smile just after sunset.

The Waning Cresent Moon rises as a smile before sunrise.

See the Moon set as a smile in Singapore (hit play)

The First Quarter Moon rises about midday, tagging behind the Sun. At the equator, the Sun and Moon more or less rise straight up, and because the Moon follows below the Sun, the top half is illuminated. At First Quarter, it is always the same half of the Moon that is illuminated, but if you were to look at it at moonset, it would look like the opposite side is lit up.

Quick Nightfall at the Equator

Nightfall comes about more quickly near the equatorial line. This is because the Sun nears and drops below the horizon at an almost 90-degree angle. The Sun moves quicker than at the more northerly or southerly latitudes, approaching the horizon at a less steep angle.

A similar thing happens at daybreak when the Sun rises almost straight up from the horizon, making for a swift transition between night and day.

For example, if we look at the time it takes for the Sun to move from 6 degrees above the horizon to 6 degrees below takes the Sun around 50 minutes to set in Quito, Ecuador. Whereas in London, UK, it can take as much as 100 minutes.

Twilight is the time between day and night when there is light outside, but the Sun is below the horizon. The equatorial regions have the shortest twilight on Earth.

They are primarily done in the navy but are also sometimes practiced for passengers’ entertainment on civilian ships. 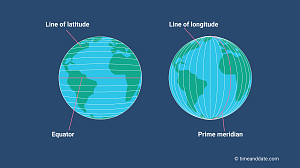 What Is Longitude and Latitude?

Cartographers and geographers divide the Earth into longitudes and latitudes in order to locate points on the globe. 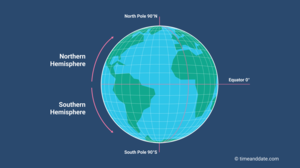 What are the Southern and Northern Hemispheres?