When Is the Next Black Moon?

A Black Moon is a special kind of Moon phase. But, if you want to spot a Black Moon, you're out of luck: they are invisible.

Black Moon is not a well known astronomical term. In recent years, the term has been made popular by social media, astrologers, and followers of the Wiccan religion.

There is no single accepted definition of a Black Moon. The term has been commonly used to refer to any of the following phenomena associated with the New Moon:

When is the next Blue Moon?

New Moon is the Moon phase we cannot see at all from Earth, as only the far side of the Moon is illuminated.

However, 2–5 times a year, the New Moon comes between Earth and the Sun, causing a solar eclipse. The New Moon, or at least a part of it, is then visible as a silhouette in front of the Sun.

Black Moons hold special significance to people who practice certain forms of Pagan religions and who believe certain actions become more potent when performed on the night of a Black Moon.

Black Moons vary by time zone. Dates above are based on the local time in Washington DC. Change location 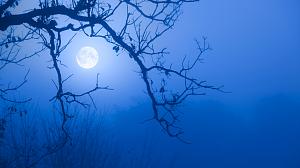 'Once in a blue moon', suggests something is very rare. But just how rare is a Blue Moon?