Home   Timers   When Did the 21st Century Start?

When Did the 21st Century Start?

On January 1, 2000, humankind celebrated the beginning of the new millennium—which was one year too early.

In 1999, the world was preparing for the New Year's party of a lifetime. The year number in the Gregorian calendar was about to tick over to 2000, supposedly ushering in not only the 21st century but also the 3rd millennium CE.

However, the party was held one year too early—it should have been on January 1, 2001.

It all boils down to the question: was there a year 0? Let's first assume that year BCE 0 existed. This would mean that:

This means that 2000 years, two full millennia, would have passed at the end of year 1999. In other words, the 3rd millennium would have started on New Year's Day 2000.

The only problem with this theory is that year 0 did not exist, as historians, calendar experts, timeanddate.com, and other killjoys kept pointing out in the lead-up to the big party in year 2000.

So, how do we know there was no year zero?

Anno domini, the year numbering system (calendar era) we use today, was devised by a 6th-century monk named Dionysius Exiguus, who lived in an area now part of Romania and Bulgaria. Dionysius used Roman numerals to number the years “since the incarnation of our Lord Jesus Christ”, as he put it in his writings—and there is no Roman numeral for the number zero.

It is worth pointing out that Dionysius did use the Latin number words nulla and nihil, both meaning “nothing,” in his calculations of the date of Easter. However, he used these words to imply the absence of a number, rather than the number zero itself. In fact, it is believed that the concept of the number zero, as it is used today, did not exist in Europe until the 13th century.

This means that year AD 1 directly followed year 1 BC, without the year count ever reaching zero. In other words, the first year of the anno domini era was year 1, not year 0. As a consequence,

So, at the end of year 1999, as people were celebrating the new millennium, only 1999 full years had passed since the beginning of the calendar era—which is one year short of two full millennia.

Of course, the big fuss over the year 2000, or Y2K, was understandable from a psychological point of view. The human brain is predisposed to highlight “big numbers”—a tendency psychologists call the round number bias. It causes us to throw extra-glamorous parties on our 20th, 30th, or 40th birthdays and to celebrate milestones like the 1000th like on Facebook or the 100th victory of our favorite sports team.

So, in celebrating the beginning of the year 2000 as the event of a lifetime, we collectively succumbed to the appeal of the big, round year number—a classic case of round number bias.

Like round and other special numbers? Try our Date Pattern Calculator!

What Did We Even Celebrate?

Even people celebrating the beginning of the new millennium on the correct date must contend with the fact that, in astronomical terms, there was nothing special about this particular event.

A year on Earth is defined as the time it takes Earth to complete an orbit around the Sun. This is called a solar or tropical year. Solar calendar systems, such as the western calendar, are designed to reflect that time span and the seasons it encompasses as precisely as possible, and they do so with varying levels of accuracy.

Year numbers, on the other hand, are just a means of counting our planet's revolutions. While this is undoubtedly a handy feature to describe and structure long time spans, the Earth's 1999th revolution around the Sun in the anno domini era is really no different than its 2000th revolution.

Only in Gregorian and Julian Calendars

In fact, looking at other calendar systems, it becomes clear how ambiguous year numbers are. For example, year 2001 marked the beginning of the 3rd millennium in the Gregorian calendar only. Other calendars, such as the Jewish calendar, the Islamic calendar, and the Hindu calendar, use completely different year numbers. So, while the Gregorian calendar is the system officially used around the world, this goes to show that our year count is nothing more than a random fabrication, which is ultimately based on the ideas and religious fervor of a 6th-century monk.

What's more, Dionysius Exiguus based the beginning of year BCE 1 in the Julian calendar, the predecessor of today's calendar system, on a religious event—the birth of Jesus—which not only lacks astronomical relevance but is also based on religious lore and, as such, a rough estimation at best. 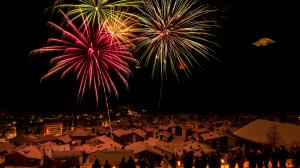 When Do Decades Start?