By Vigdis Hocken and Konstantin Bikos

We use leap years to keep our calendar in sync with the seasons. How do leap years work, and how often do they occur?

Leap Years Have an Extra Day

Leap years are years where an extra day is added to the end of the shortest month, February. This so-called intercalary day, February 29, is commonly referred to as leap day.

Leap years have 366 days instead of the usual 365 days and occur almost every four years.

What is a leap second?

In our modern-day Gregorian calendar, three criteria must be taken into account to identify leap years:

Why Do We Have Leap Years?

Leap days keep our calendar in alignment with Earth's revolutions around the Sun. It takes Earth approximately 365.242189 days, or 365 days, 5 hours, 48 minutes, and 45 seconds, to circle once around the Sun. This is called a tropical year, and it starts on the March equinox.

However, the Gregorian calendar has only 365 days in a year. If we didn't add a leap day on February 29 almost every four years, each calendar year would begin about 6 hours earlier in relation to Earth's revolution around the Sun (see illustration).

As a consequence, our time reckoning would slowly drift apart from the tropical year and get increasingly out of sync with the seasons. With a deviation of approximately 6 hours per year, the seasons would shift by about 24 calendar days within 100 years. Allow this to happen for a while, and Northern Hemisphere dwellers will be celebrating Christmas in the middle of summer in a matter of a few centuries.

Leap days fix that error by giving Earth the additional time it needs to complete a full circle around the Sun.

Why Don't We Add a Leap Day Every 4 Years?

If the tropical year was precisely 6 hours longer than a calendar year with 365 days, we could use the Julian calendar, which adds a leap day every 4 years without exception. The deviation would grow to exactly 24 hours over 4 years, and Earth would need exactly one day to catch up to the position in its orbit where it was 4 years prior.

However, the deviation between the common year and the tropical year is a little less than 6 hours. The Gregorian calendar addresses this by employing a slightly more complicated set of rules to determine which years are leap years. It's still not perfect, but the resulting deviation is very small.

The year 2000 was the first time the third criterion was used in most parts of the world since the transition from the Julian calendar to the Gregorian calendar, which began in 1582.

Of course, the same can be said about the year 1600. However, only a handful of countries had adopted the Gregorian calendar then, and the rest of the world was still using the Julian calendar.

The next time the third criterion takes effect will be the year 2400.

Leap years in the western calendar were first introduced over 2000 years ago by Roman general Julius Caesar. The Julian calendar, which was named after him, had only one rule: any year evenly divisible by four would be a leap year.

This formula produced too many leap years, causing the Julian calendar to drift apart from the tropical year at a rate of 1 day per 128 years. This was not corrected until the introduction of the Gregorian calendar more than 1500 years later, when a number of days were skipped to realign our calendar with the seasons.

The ancient Roman Calendar added an extra month every few years to stay in sync with the seasons, similar to the Chinese leap month. 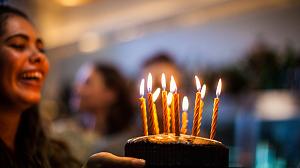