On August 21, 2017, a total solar eclipse will cross the United States from coast to coast. Which location will see it first and last? Where is the best place to view it?

User picture gallery. Send us yours!

The total solar eclipse on August 21, 2017 will be visible along a narrow strip spanning from Oregon to South Carolina and including parts of the Pacific and Atlantic Oceans. The United States is the only landmass where totality will be visible. In areas surrounding the path of totality, including all of North America, Central America, and the Caribbean, as well as parts of South America, Europe, and Africa, the Sun will be only partly covered.

See the Moon's shadow on a map

If you want to be among the first people on US mainland to see the New Moon move in front of the Sun and totally block out the daylight, join the crowd at Yaquina Head on the morning of August 21. This rocky headland, just north of the city center of Newport, Oregon, is nearly bang in the middle of the path of totality and juts out into the Pacific Ocean just enough to clinch the award for the first inch of land to be touched by the Moon's main shadow, the umbra. Here, the Moon will begin moving in front of the Sun at 9:04 am local time. The Sun will be completely obscured at 10:15 am and totality will last for 1 minute and 51 seconds.

Having said that, it's an extremely close call. According to our calculations, Cape Foulweather, a mere 16 kilometers (10 miles) north of Yaquina Head, comes in a close second—with a lag of just 1 second. So since parking at Yaquina Head is limited and the crowd is expected to be sizeable, you might want to head a bit farther north. If you're still not convinced, here is another perk: totality at Cape Foulweather will last a whole 8 seconds longer than at Yaquina Head.

Protect your eyes during the eclipse

The total phase, when the sky turns almost as black as night, lasts about 2 minutes and 42 seconds in the point where it is the absolute longest.

There are lots of locations with similar or just slightly shorter totality, and as long as the sky is clear, the sight of totality will be just as awesome in either of these places. A few of the places along the central line with totality duration around max (at least 2:40) are:

The last living thing on the US mainland to witness totality on August 21 might very well be a lucky wood stork, piping plover, or a member of one of the other bird species populating the Cape Romain National Wildlife Refuge on the coast of South Carolina. Before disappearing out onto the Atlantic Ocean, the Moon's umbra will sweep over this stretch of coastal wilderness, bringing the Great American Eclipse of 2017 to an end on the mainland.

Before setting course for Cape Romain, the eclipse shadow will cross a number of small towns that lie a bit farther inland, including Awendaw. However, the last populated place to see totality will be McClellanville, South Carolina. Here, the partial eclipse will start at 1:17 pm local time, and totality will last from 2:46 pm to just before 2:49 pm.

By the way, if you are in Charleston, South Carolina's biggest city, it's probably best to stay put to avoid getting bogged down by traffic. Charleston will also be one of the last places to see the total eclipse. Here, it will end just about a minute before it does at Cape Romain.

Partial Eclipse Start and End in the US

People in northern California and Hawaii may opt to stay closer to home and still earn a mention in the eclipse history books. While the Sun will not be completely obscured here, these are the places in the US where the partial solar eclipse will be visible first. In Hawaii, at Cape Kumukahi on the Big Island, the rising Sun will reveal a partial solar eclipse at 6:01 am local time. At the same time, at just before 9:01 am local time, the partial eclipse will become visible on the coastline around Mattole Beach, south of Eureka in California.

So, how can the penumbra reach Hawaii and California at the same time? Well, the Moon's shadow moves from west to east, approaching the Californian coast from the Pacific Ocean. At the same time, the border between day and night moves from east to west, the light of day incidentally reaching the easternmost tip of Hawaii at the same moment when the first people on the coast of California start seeing a partial eclipse.

Animation showing the path of the shadow

The last place on the US mainland to see the partial eclipse will be just south of Miami, where the trailing edge of the Moon's penumbra will sweep across the coastline at 4:21 pm local time.

On a global scale, the partial eclipse will last be visible on the coast of Brazil, in the area surrounding the city of Belém. Here, the shadow will leave around 6:03 pm local time. 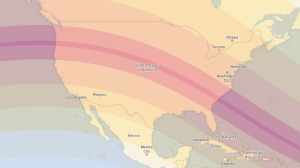 "Where to See the Eclipse" Map