Solar eclipses have historically been viewed as omens that bring about death and destruction. But in reality, they are harmless—and they even helped prove Einstein's theory of relativity.

The word eclipse comes from ekleipsis, the ancient Greek word for being abandoned.

The British astronomer and mathematician, Sir Arthur Eddington, used the total solar eclipse of May 29, 1919 to test Albert Einstein's theory of general relativity.

By taking pictures of stars near the Sun during totality, Eddington was able to show that gravity can bend light. This phenomenon is called gravitational deflection.

Helium Named After the Sun

A solar eclipse is also responsible for the discovery of helium. The first piece of evidence for the existence of the second lightest and the second most abundant element known to humans was discovered by the French astronomer Jules Janssen during a total solar eclipse on August 18, 1868. Because of this, it's named after the Greek word for the Sun: Helios.

Surviving records have shown that the Babylonians and the ancient Chinese were able to predict solar eclipses as early as 2500 BCE.

In China, solar eclipses were thought to be associated with the health and success of the emperor, and failing to predict one meant putting him in danger. Legend has it that 2 astrologers, Hsi and Ho, were executed for failing to predict a solar eclipse. Historians and astronomers believe that the eclipse that they failed to forecast occurred on October 22, 2134 BCE, which would make it the oldest solar eclipse ever recorded in human history.

Clay tablets found at ancient archaeological sites show that the Babylonians not only recorded eclipses—the earliest known Babylonian record is of the eclipse that took place on May 3, 1375 BCE—but were also fairly accurate in predicting them. They were the first people to use the saros cycle to predict eclipses. The saros cycle relates to the lunar cycle and is about 6,585.3 days (18 years, 11 days, and 8 hours) long.

According to the Greek historian Herodotus, a solar eclipse in 585 BCE stopped the war between the Lydians and the Medes, who saw the dark skies as a sign to make peace with each other.

The Greek astronomer Hipparchus used a solar eclipse to determine that the Moon was about 429,000 km (268,000 mi) away from the Earth. This is only about 11% more than what today’s scientists accept as the average distance between the Moon and the Earth.

Although early eclipse pioneers, including Chinese astronomer Liu Hsiang, Greek philosopher Plutarch, and Byzantine historian Leo Diaconus tried to describe and explain solar eclipses and their features, it was not until 1605 that astronomer Johannes Kepler gave a scientific description of a total solar eclipse.

Some Other Notable Solar Eclipses in History

The scientific fascination with solar eclipses has led to some important scientific discoveries about the nature of the Sun, Moon, and our solar system.

When is the next eclipse in your city?

Celestial events and highlights of 2021 and 2022 including supermoons, solar and lunar eclipses, meteor showers, solstices, and equinoxes. 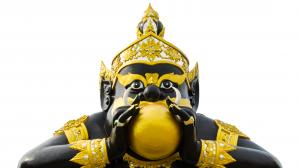 The solar eclipse has inspired many mythical stories and influenced human behavior. Even today, eclipses of the Sun are considered bad omens in many cultures.