Comets are small celestial bodies that orbit the Sun. Primarily made of dust and ice, they are thought to be remnants of the formation of the Solar System.

Where Do Comets Come From?

Comets are thought to come from 2 places in the Solar System:

What are meteor showers?

They Have a Coma

One of the distinguishing features of a comet is that most of them develop a tail, known as a coma when they come close to the Sun.

Away from the Sun, comets are frozen celestial bodies that are hard to detect. However, as a comet comes closer to the Sun, the Sun’s heat and radiation vaporize its ice and dust. These vaporized gasses collect dust and stream from the center of the comet, just like a tail. This tail can be thousands of miles long.

While most comets passing by the Sun are hard to observe from Earth without specialized equipment, some comets are bright enough to be seen by the naked eye. A comet’s brightness is due to sunlight reflecting and refracting off the dust in the tail.

Comets usually have two tails, which point in different directions. The dust in the comet is responsible for one tail. This tail, also called the dust tail, tends to be broad and curved. The gasses in the comet make the other tail, called the plasma or the ion tail. This tail is thin and straight and tends to point directly away from the Sun.

A light year (light-year or lightyear) is a unit of distance and is defined by the International Astronomical Union as the distance traveled by light in a vacuum during a Julian year. It is approximately equal to 10 trillion kilometers (6 trillion miles). 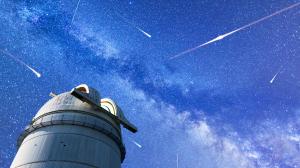 What Is a Meteor Shower 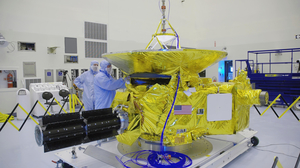