Comet ISON, known as C/2012 S1 among scientific circles, is the most anticipated comet of the year. At the time of its discovery in 2012, many astronomers and media outlets called it the "comet of the century".

It was though that the comet would glow as bright as the Moon after its closest approach to the Sun (perihelion) on November 28, which is Thanksgiving Day in the United States.

The initial enthusiasm over the comet has recently waned in recent months since it hasn't become as bright as it was expected to. Despite this, the comet is expected to be visible to the naked eyes to observers in the Northern Hemisphere throughout the month of December.

ISON falls in a special category of comets also known as sun-grazing comets. These comets pass very close to the Sun at their perihelion - usually a few thousand kilometers from the Sun's surface.

The close solar approach of such comets means that sometimes smaller comets tend to evaporate when they come close to the Sun, while larger comets may disintegrate when facing strong tidal forces from the Sun. Sometimes though larger, sun-grazing comets can survive their perihelion approach.

Astronomers believe that there is a possibility that ISON may disintegrate when it makes its closest approach to the Sun on November 28. If it does not disintegrate, the comet will be visible to the naked eye in December even though it is not expected to be as bright as it was initially thought to be.

Where and when to view ISON

Observers from the Northern Hemisphere are best located to view ISON in the early mornings before and after it passes its perihelion. Prior to November 28, the comet can be seen using a pair of binoculars.

Astronomers expect the comet to be visible to the naked eye after sunset and before sunrise throughout the month of December.

On December 26, Boxing Day in many parts of the world, the comet will make its closest approach to Earth. At this time, the comet will be in the constellation Draco and will be visible in the northwestern sky after sunset and in the eastern sky before sunrise.

Those in the Southern Hemisphere may be able to view the comet with binoculars low in the east at dawn until November 28. It may be possible to view the comet close to the Sun a few days before and after its perihelion. Please be very careful, it is not recommended to look at the Sun directly! 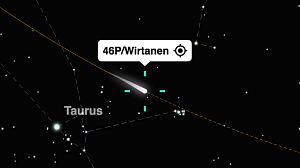 Comet 46P/Wirtanen will grace the night sky in December 2018. Find when, how, and where to see the brightest comet of the year with your naked eyes.