December 2018: Comet 46P/Wirtanen to Light Up the Night Sky

If you are looking for a last celestial adventure to end 2018, look no further. In fact, just look up, because the last comet of the year, Comet 46P/Wirtanen, will be bright enough to be seen with naked eyes throughout the month of December.

Discovered on January 17, 1948 by American Astronomer Carl Wirtanen at the Lick Observatory near San Jose in the state of California, USA, 46P/Wirtanen is one of ten comets to have made very close approaches to the Earth in modern history. Only a handful of these ten comets, including 46P/Wirtanen, were bright enough to be seen with naked eyes.

Some astronomers have predicted that 46P/Wirtanen may be visible without any viewing aids in the weeks around December 16, 2018, when it makes its closest approach to the Earth in 70 years. This is just 4 days after the comet reaches its perihelion—the closest point to the Sun on its orbit—on Dec 12, 2018.

Despite their enthusiasm about the comet being visible with naked eyes, astronomers are also warning it is possible that it may not turn out to be as bright as predicted. According to our calculations, the comet is expected to reach a maximum magnitude of 4.2.

A magnitude of 3 is good enough for the comet to be visible from a brightly lit city, whereas anything between 3 and 5 magnitudes would require a visit to a dark spot far away from ambient lights. A magnitude above 5 means that one will need binoculars or a telescope to see the comet.

There is no need to despair, however, because no matter what happens, the comet will be bright enough to be seen through binoculars or small telescopes.

When to See Comet 46P/Wirtanen?

Around December 16, when the comet zooms past close to the Earth, it will be visible from most locations in the world. If all goes as predicted, observers can start getting rid of viewing aids around December 13, 2018, and see the comet with naked eyes.

By Christmas, most Southern Hemisphere dwellers will lose sight of 46P/Wirtanen. It will remain visible to Northern Hemisphere residents until early January, when it reaches a magnitude of 6.

Can you see Comet 46P/Wirtanen tonight?

Where to See Comet Wirtanen?

In the Southern Hemisphere, the comet will be visible after the end of astronomical twilight in the constellation Fornax in the eastern sky until late November. It sets in the west around dawn.

Sunrise, sunset, and twilight times in your location

In early December, the comet will move through constellations Eridanus and Cetus. It will reach Taurus around December 12 and pass very close to the Pleiades star cluster around December 16.

To find Taurus, and Comet Wirtanen, look high up in the sky after the end of civil twilight in the evening and before it gets light in the morning.

Comet rise and set time and visibility in your city

Comet Wirtanen takes about 5.439 years to finish one orbit around the Sun, making it a short-period comet.

Like many well-known short period comets, Comet 46P belongs to the Jupiter family of comets. This means its orbit does not extend beyond Jupiter and is heavily influenced by the gravitational forces of the largest planet in the solar system.

Jupiter family comets are thought to have originated in the Kuiper belt—a belt of celestial bodies made of rocks and ice found just beyond Neptune's orbit.

Wirtanen is not a particularly large comet—scientists estimate it has a diameter of only about 1.2 kilometers (0.75 miles). Despite its small size, it presented lots of opportunities for scientific discoveries. For starters, it is classified as a hyperactive comet, which means that it has more ice in its nucleus than one would expect given its size. As it approaches the Sun, the ice melts and turns into a huge cloud that becomes part of the comet's coma.

The comet's close approach to Earth will not only make it possible for astronomers to study it with equipment that would not be possible to carry on spacecraft, but also to compare the comet's composition and behavior to other comets.

There May Be a Meteor Shower

Some meteor showers are associated with the debris left by passing comets. In 2012, it was predicted that the passing Wirtanen might cause a minor meteor shower, which it did. There are no such predictions so far this year, but keep an eye out for errant meteors that may be caused by the comet whizzing past us. 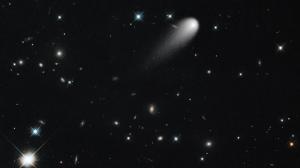 All about Comet ISON

Everything you need to know about Comet ISON or C/2012 S1.