By Graham Jones and Konstantin Bikos

The year 2020 ended with a special astronomical event: the closest great conjunction of Jupiter and Saturn in 397 years. On December 21, the two planets almost touched in the sky. Scroll down to see telescope footage!

Night Sky Map: find Saturn and Jupiter in the sky

Generally speaking, a conjunction is when two objects appear close to each other in the sky. A conjunction of Jupiter and Saturn—which only happens about once every 20 years—is called a great conjunction.

In the technical language of astronomers, there are a number of ways to define a conjunction. One way is to say it is the moment of minimum separation between two objects as viewed from the Earth. By this definition, the 2020 great conjunction of Jupiter and Saturn occurred at about 18:20 UTC on December 21.

Scroll down to see a live stream recording of the 2020 great conjunction!

How the 2020 Great Conjunction Unfolded

As November began, Jupiter and Saturn were five degrees apart, which is the width of your three middle fingers held at arm's length. (Another way to think about angular distances in the sky is to remember that the Moon's size is about half a degree.) At the start of December, the planets were two degrees apart, and still moving closer together.

A handy guide to measuring the sky

Check out these great recorded live streams to see Jupiter and Saturn meet in the sky on December 21!

On December 21, the day of the conjunction, Jupiter and Saturn were separated by a mere 0.1 degrees, and appeared as what may have looked like a single bright “star.” The two planets are completely merged together on our Night Sky Map for this date, although a careful observer should have been able to separate them in the sky with the naked eye.

Jupiter and Saturn continued to be an impressive sight in the early evenings following December 21. During January 2021, however, the two planets became lost in the glare of the Sun.

As Jupiter and Saturn had their rendezvous just a few days before Christmas, forming what looked like a single bright object in the sky, the 2020 great conjunction was sometimes also called the “Christmas star” or “Bethlehem star.”

In fact, some scholars have theorized that the original Christmas star, known as the Star of Bethlehem, might also have been a great conjunction. According to Christian lore, a bright light in the sky led the Three Wise Men to the location of Jesus's birth. Other theories aiming to explain this biblical phenomenon include a supernova explosion and a comet.

Some media outlets also referred to the phenomenon as “kissing stars” or “double planets.”

The December 21, 2020 conjunction was the closest great conjunction since July 16, 1623. At the great conjunction of 1623, Jupiter and Saturn were slightly less than 0.1 degrees apart. However, this event would have been difficult—although not impossible—to observe since the two planets were near the Sun.

The last time that the two planets were easily observable when separated by less than 0.1 degrees was almost 800 years ago, during the great conjunction of 1226.

Why Do Conjunctions Happen?

The solar system is the shape of a thin disk: the Earth, the Moon, and the planets orbit the Sun in roughly the same plane. Astronomers call this plane the ecliptic. Because of this alignment, the Sun, the Moon, and the five planets visible to the naked eye—Mercury, Venus, Mars, Jupiter, and Saturn—follow the same general path as they travel across the Earth's sky.

This is why the Sun, the Moon, and the planets sometimes meet in the sky. These meetings are conjunctions.

How Often Do Conjunctions Occur?

Conjunctions involving the Moon happen frequently. As it circles the Earth once a month, the Moon passes each of the planets in the sky. When the Moon passes the Sun, the result can be an eclipse (which is where the term ecliptic comes from). The reason an eclipse doesn't happen every month is that the Moon's orbit is slightly tilted in relation to the ecliptic, and it normally passes above or below the Sun.

A conjunction of Jupiter and Saturn, on the other hand, is relatively rare: it only happens about once every 20 years. For this reason, it is known as the great conjunction.

Why Are Jupiter-Saturn Conjunctions So Rare?

Jupiter and Saturn are much farther away than the other naked-eye planets. This means they move more slowly, because an object's orbital speed decreases with distance. The Earth takes one year to complete one orbit of the Sun, but Jupiter takes 12 years, and Saturn takes 30 years.

Distance, brightness, and size of planets

How old are you in planet years?

Occasionally, Jupiter appears to pass Saturn three times, in a zigzag fashion. This phenomenon, which is called a triple conjunction, is an illusion caused by the Earth's own movement around the Sun. The most recent triple conjunction was in 1980-81, when Jupiter passed Saturn on December 31, 1980—and then again on March 4 and July 24, 1981.

When Will the Next Great Conjunctions Take Place?

After 2020, the next great conjunctions will occur on November 2, 2040 and April 7, 2060. On both these occasions, the minimum separation of Jupiter and Saturn will be 1.1 degrees—which means they will be eleven times farther apart than on December 21, 2020.

Does Jupiter Ever Pass Directly In Front of Saturn?

On extraordinarily rare occasions, a great conjunction is so close that Jupiter passes directly in front of Saturn. If Jupiter partially obscures Saturn, the event is known as a transit. If Jupiter completely covers Saturn, it is called an occultation. 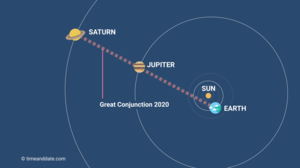 A conjunction is when planets like Mars, Jupiter, or Saturn, or other bodies like stars or the Moon, meet in the sky. Why and when do conjunctions happen?

When Mercury transits the Sun, you can see it as a tiny black dot silhouetted against the Sun's disk. The last Mercury transit was on November 11, 2019.