Umbra, Penumbra, and Antumbra: Why Are There 3 Shadows?

On their journey through space, the Earth and the Moon cast 3 different shadows causing different types of solar and lunar eclipses. Why are there 3 shadows?

The type of eclipse we experience depends on the type of shadow that is involved. Both the Moon and Earth cast 3 shadows:

The umbra is the shadow's dark center portion, while the penumbra and the antumbra are different types of half-shadows.

To understand why the Earth and the Moon have 3 types of shadows, let's start on a smaller scale. The number and types of shadows created by an opaque object depend on its size in relation to the size of the light source. However, their absolute size is irrelevant, so a basketball illuminated by a large lamp produces the same shadows as the Moon illuminated by the Sun.

Rule: If the light emanates from a punctual light source, the object casts only 1 type of shadow: an umbra.

Let's say the light source is a tiny flashlight pointing into your direction. If you look into the direction of the lamp from behind the basketball, it is entirely invisible as the ball blocks the view and the light rays don't reach you. The ball's shadow is uniform, it only has an umbra.

If you move to the side, the flashlight immediately becomes visible as soon as you leave the shadow.

Rule: If the light source is not punctual but has a larger surface area, a 2nd type of shadow appears around the object's umbra: the penumbra.

Now the light source is a round lamp that is a little smaller in diameter than the basketball. If you line up with the lamp and the ball, no light is visible because you are within the ball's umbra. However, as you move to either side, part of the light source becomes visible. That's the penumbra.

If you move further to the side until you can see all of the lamp's surface, you have left the penumbra.

In this experiment, the light source is another round lamp, but this time it has twice the ball's diameter. Imagine once more that you are looking at the lamp from behind the ball. As long as you are fairly close to it, the ball's apparent size exceeds the lamp's apparent size. You are within the umbra, and the lamp is invisible.

However, as you move away from the ball, its apparent size decreases. At some point, the basketball will appear smaller than the lamp. A ring of light will appear around the ball as the outer rim of the lamp comes into view. You have just entered the basketball's antumbra.

Our solar system resembles the set-up of the last experiment. The Sun is a very large light source, its diameter exceeding that of both the Earth and the Moon. This means that, on their journey through space, both objects produce all 3 types of shadows.

The umbral shadow can produce the following eclipses:

The penumbral shadow is involved in these eclipses:

The antumbral shadow can only cause 1 type of eclipse:

What Is the Penumbra? 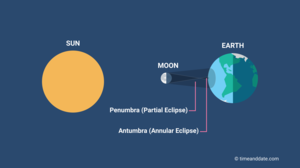