The New Year's Eve and New Year's Day celebrations in Scotland are known as Hogmanay and may last into January 2, an annual bank holiday. This holiday is marked with parties, specially prepared foods and the custom of first footing.

Is 2nd January a Public Holiday?

2nd January is a public holiday in Scotland, where it is a day off for the general population, and schools and most businesses are closed.

Hogmanay celebrations generally begin in the afternoon or evening of New Year's Eve and continue into early hours of the New Year's Day morning. Some family gatherings or private celebrations organized by groups of friends may continue through to January 2.

In some areas, the custom of first footing continues on January 2. First footing refers to when someone is the first person to enter a house on January 1. For many people in Scotland, January 2 is a day to recover from the Christmas and Hogmanay celebrations or to spend some quiet time with friends or family members before returning to work on January 3.

January 2 is not a bank or public holiday in England, Wales and Northern Ireland. However, January 1 and 2 are bank holidays in Scotland. Banks and post offices are closed. There may be limited public transport services or none at all. Some stores and businesses may be closed.

The Hogmanay celebration origins can be traced to pre-Christian observances in mid-winter. These included large fires to tempt the Sun back to earth, as well as feasts of the food gathered and harvested in the autumn. Hogmanay was traditionally a more important celebration than Christmas in Scotland but the importance of Christmas recently increased.

Fires are burnt during Hogmanay. This is a tradition from the pre-Christian winter celebrations. In Stonehaven, Kincardineshire, fire balls are made of tar, paper and wire attached to a chain or non-flammable rope. The balls are lit and swung around people's heads in a procession. At the end of the evening, burning balls are thrown into the harbor. In Burghead, Moray, the clavie (a barrel filled with of tar and old casks) is burnt on January 11, the old Hogmanay date.

People traditionally ate black bun on Twelfth Night (January 6) but it is now eaten on the last day of Hogmanay. Black bun consists of a pastry case filled with nuts, spices and dried fruit soaked in brandy. It is often made a few weeks ahead to allow the flavors to mature.

New Year's Eve, or Hogmanay in Scotland, is the last day of the year in the Gregorian calendar. 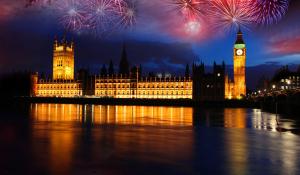 New Year's Day marks the start of a new year in the Gregorian calendar, the official calendar used in the United Kingdom.