Is Patriot Day a Public Holiday?

On the direction of the President, the flag of the United States of America should be displayed on the homes of Americans, the White House and all United States government buildings in the whole world. The flag should be flown at half-staff as a mark of respect to those who died on September 11, 2001. Many people observe a moment of silence at 8:46 AM (Eastern Daylight Time). This marks the time that the first plane flew into the World Trade Center. Some communities, particularly in the areas directly affected by the attacks, hold special church services or prayer meetings. People who personally experienced the events in 2001 or lost loved ones in them, may lay flowers or visit memorials.

Patriot Day is not a federal holiday and schools and businesses do not close. Public transit systems run on their regular schedules. Some people and organizations may take some time out to hold prayers for the victims of the attacks, but these do not usually affect public life for more than a few minutes.

On September 11, 2001, four planes were hijacked. The hijackers then deliberately flew three of the planes into two important buildings, the Pentagon in Washington DC and the Twin Towers of the World Trade Center in New York. The fourth crashed into a field near Shanksville, Pennsylvania. The loss of life and damage that these hijackings caused form the biggest act of terrorism ever on United States soil. Nearly 3000 people died in the attacks and the economic impact was immense.

The most potent symbol of the events that happened on September 11, 2001 are pictures and videos of planes flying into buildings, of the Twin Towers of the World Trade Center engulfed in smoke and later collapsing and of people falling from buildings. Pictures taken of damaged buildings and relatives looking for loved ones in the days and weeks after the attacks are also often shown. The flag of the United States is often displayed around images of the events on September 11, 2001. This is to remind Americans that their country remained strong in the face of massive terrorist attacks.

Patriot Day should not be confused with Patriot’s Day, also known as Patriots Day, which commemorates the battles of Lexington and Concord in 1775, which were two of the earliest battles in the American Revolutionary War. 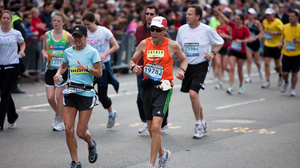 Patriots' Day commemorates the battles of Lexington and Concord in 1775, which were two of the earliest battles in the American Revolutionary War.