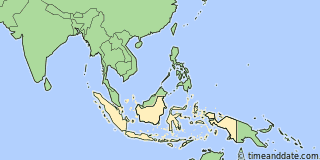 The Indonesian archipelago stretches from 94°45′E to 141°05′E longitude and spans three time zones from UTC+7 in the west, via a central UTC+8, to UTC+9 in the east.

In 2012, Indonesian lawmakers considered merging the three time zones to UTC+8 (Central Indonesian Time). It would have lined up Indonesia's time zone with trading partners in other countries like China, Singapore, and Western Australia. The Indonesian government later postponed the measure.