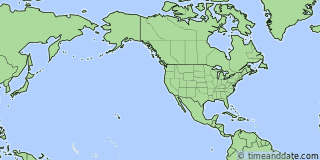 Kiribati straddles both the 180° meridian and the equator and is the only country in the world that lies in all four hemispheres.

The Republic of Kiribati was formed in 1979 when the Gilbert Islands gained independence from Great Britain. At that time, the eastern Phoenix and Line Islands were on the other side of the International Date Line, resulting in a 23-hour difference between them and the western Gilbert Islands.

In 1994, Kiribati decided to move the International Date Line, and they did it by skipping January 1, 1995 in the country's two eastern island groups. By adding 24 hours to the time zones on the Phoenix and Line Islands, they effectively made a dent in the dateline, moving it all the way to the 150° east longitude.