Moonbows or lunar rainbows are rare natural atmospheric phenomena that occur when the Moon’s light is reflected and refracted off water droplets in the air.

Moonbows are similar to rainbows, but they are created by moonlight instead of direct sunlight.

Moonbows are rarer than rainbows because a variety of weather and astronomical conditions have to be just right for them to be created.

Moonbows occur on the opposite side of the Moon and tend to look white to the human eye. This is because their colors are not bright enough to be perceived by the receptors in the human eye. It is possible, however, to view the colors in a moonbow using long exposure photography.

What is the Moon Illusion?

Moonbows are more frequent in some locations around the world. Most of these locations tend to have waterfalls, which create layers of mist in the air. Some of these locations are the Yosemite National Park in California and Cumberland Falls State Resort Park in Kentucky, U.S.; Victoria Falls on the border of Zambia and Zimbabwe; and Waimea in Hawaii, U.S. 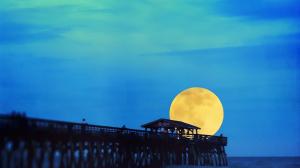 Some days, the Full Moon at the horizon looks larger than a normal Full Moon. Does the Moon really change size or is this an illusion?