At the moment, Earth is the only place in the solar system—or beyond—where life is known to exist.

A Brief Overview of Earth

Earth is the third planet from the Sun, and the largest of the rocky inner planets. It is home to many different forms of life, from microscopic organisms to plants and animals.

Compare the sizes and order of the planets

About 71 percent of the surface is covered by a layer of liquid water; the average depth of these oceans is about 3.7 kilometers (2.3 miles). The land is divided into continents, which move slowly over time. About 200 million years ago, nearly all of Earth’s land was joined together in a supercontinent called Pangaea.

What Is the Shape of Earth?

With the exception of Mercury and Venus, other planets in the solar system are also slightly flattened at the poles.

How Long Is a Day and a Year?

A day on Earth is usually defined as 86,400 seconds (24 hours). However, a solar day—the time between two solar noons, when the Sun reaches its highest point in the sky—can vary by up to 30 seconds throughout the year. Also, the time it takes Earth to spin once on its axis can vary by a few milliseconds.

A year on Earth is approximately 365 and a quarter days.

Is there such a thing as a perfect calendar?

How Many Moons Does Earth Have?

Earth has one natural satellite, called the Moon. It was possibly formed when a large object, about the size of Mars, crashed into Earth in the early days of the solar system. The debris created by this collision was pulled together by gravity to make the Moon.

Humans had reached most parts of the globe by around 15,000 years ago. Yet some places on Earth remained undiscovered until relatively recently. Perhaps the most notable example is the continent of Antarctica, which was not found until 1820—four decades after the discovery of Uranus.

In terms of the exploration of life on Earth, a vast amount remains undiscovered, even today. According to conservative estimates, only about 15 percent of all living species on Earth are known.

How Long Does It Take to Orbit Earth?

Orbital period—the time it takes to complete one orbit—depends on distance. The closer an object is, the faster it travels. Here are some examples, using approximate numbers, of how long an object takes to go around Earth one time.

* This is the same time it takes Earth to rotate once on its axis. Therefore, when seen from Earth, a geostationary satellite always appears to be in the same place. 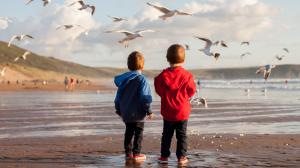 The gravitational pull of the Moon and the Sun makes the water in the oceans bulge, causing a continuous change between high and low tide.