Why Isn't the Year's Earliest Sunset on the Winter Solstice?

Winter solstice is the shortest day of the year in terms of daylight, but it does not have the latest sunrise nor the earliest sunset of the year.

This is because of a discrepancy between our modern-day timekeeping methods and how time is measured using the Sun, known as the equation of time.

Earliest Sunset a Few Days Before

If you look at the sunrise and sunset times for any city in the Northern Hemisphere around the December Solstice, you will notice that the earliest sunset occurs a few days before the solstice and the latest sunrise happens a few days after the solstice.

This is also true for locations in the Southern Hemisphere. There, the year's earliest sunset happens a few days before, and the year's latest sunrise occurs a few days after the winter solstice in June.

What are equinoxes and solstices?

Let’s take the example of New York City in the Northern Hemisphere and Sydney in the Southern Hemisphere. As you can see in the table, the latest sunrises and the earliest sunsets in the two cities do not occur on the day of the winter solstice.

This can be explained by two factors: the equation of time and a location's latitude.

Most clocks run on the idea that a day is exactly 24 hours. Technically, a day is the duration between one solar noon, the time of the day when the Sun is at the highest point in the sky, to the next.

On most days, solar noon does not occur at the same time as noon on your watch. Around the solstices, solar noon occurs a few minutes later than the previous day. For example, on December 21, 2022—the day of the Northern Hemisphere winter solstice—solar noon in New York is at 11:54 am EST. On January 4, 2023, the day of the latest sunrise, solar noon takes place 6 minutes later, at 12:00 Noon EST.

This occurs because of the Sun’s declination, which is the angle at which the rays of the Sun hit the plane of Earth’s Equator.

During the equinoxes, when the Sun’s declination is 0 degrees, most locations on Earth, with the exception of locations on and around the poles, experience around 12 hours of sunlight. 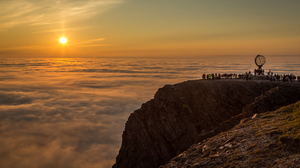 The Midnight Sun is where the Sun never sets over a period of 24 hours or more. It occurs in polar regions during summer.