Many fans and enthusiasts of William Shakespeare, who was one of England’s greatest poets and dramatists, celebrate National Shakespeare Day, also known as Shakespeare Day, on April 23 each year. April 23 is also St George’s Day and the United Nations’ World Book and Copyright Day, which was a natural choice to pay a worldwide tribute to writers such as Shakespeare.

Is Shakespeare Day a Public Holiday?

Even though Shakespeare Day falls on Saturday, April 23, 2022, it is a working day. Most businesses follow regular opening hours in United Kingdom.

Special pageants are held at Stratford-upon-Avon in Warwickshire, where Shakespeare was born and where thousands of tourists go each year to see his plays performed. The bells of Holy Trinity Church ring out and the Mayor of Stratford leads a procession there to lay flowers on Shakespeare’s’ grave. The procession includes bands, civic dignitaries, costumed actors and actresses, Morris dancers, and the staff and pupils of some local schools.

In some schools, regular lessons are set aside for students to learn about the great playwright and poet, and his sonnets, narrative poems and plays. Enthusiasts and fans, including the British Shakespeare Company, have campaigned for Parliament in the United Kingdom to officially recognize national Shakespeare Day.

Shakespeare’s Birthday is an observance and not a bank holiday in the United Kingdom.

No one really knows the exact date of William Shakespeare’s birth, although he was baptized on April 26, 1564, and died on April 23, 1616. Some believe he was born on April 23, although birth dates were generally not recorded in his time. In his younger years Shakespeare attended the Christian Holy Trinity church, the now famous limestone cross-shaped cathedral on the banks of the Avon River in the United Kingdom.

At the age of 18 Shakespeare married Anne Hathaway, who bore him three children. Between 1585 and 1592 he began a successful career in London as an actor, writer, and part-owner of the playing company the Lord Chamberlain's Men, later known as the King's Men. It is believed that he retired in Stratford around 1613, where he died three years later. Few records of Shakespeare's private life survive, and there has been considerable speculation about such matters, and whether the works attributed to him were written by others.

This Bard of Avon has been referred to as a “literary genius” and “Britain’s greatest playwright and poet”. His work includes comedies, such as The Taming of the Shrew and a Midsummer Night’s Dream, as well as tragedies such as King Lear, Hamlet and Romeo and Juliet. Much of his work has been seen in modern-day theatre, the ballet and in modern films. His plays have been translated in many different languages across the world.

The Globe Theatre was a theatre in London associated with William Shakespeare. It was built in 1599 but was later destroyed by fire. A second Globe Theatre was rebuilt on the same site in 1614 and closed in 1642. A modern reconstruction of the theatre, “Shakespeare’s Globe”, is currently located in London. It consists of: The Globe Theatre, with a professional theatre company incorporating international artists playing a summer season of plays; Globe Education, which works with students of all ages; and Shakespeare’s Globe Exhibition, devoted to Shakespeare and his contemporaries in performance.

Other symbols identified with Shakespeare include: an image of the poet on a postage stamp or on a portrait; and symbols from his plays, such as a rose (Romeo and Juliet), a human skull (Hamlet), and blood, ghosts and witches (Macbeth).

www.shakespeareday.com (For information and events on the day.) 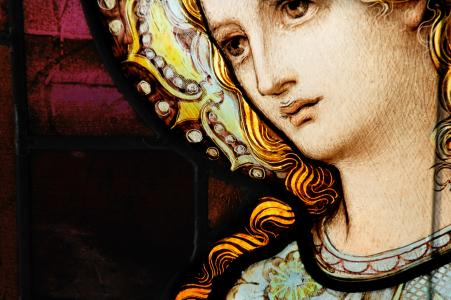