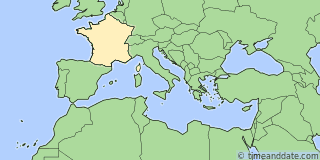 Country With the Most Time Zones

With its 12 standard times, France currently holds the world record for the country with the most time zones, beating even the United States and Russia, which have 11 time zones each.

The main part of the country, France métropolitaine, which lies in central Europe and includes the capital Paris, spans only 1 time zone. The remaining 11 time zones are added by France's dependencies (France d’Outre-Mer). Please see below for a complete list.

When Saint Pierre and Miquelon observes Daylight Saving Time, it even adds a 13th local time to the count.

Time Zone Not Currently Being Observed in France

Only the European part of France and the collectivity of Saint Pierre and Miquelon use Daylight Saving Time (DST).

Time Zones Being Used in Dependencies of France

In 1884, the international community adopted Greenwich Mean Time (GMT) as the world's time standard. Back then, GMT was based on solar time at the prime meridian that runs through Greenwich, United Kingdom.

However, France continued to use its own standard for several decades. It was based on solar time in Paris, so local time in France was Paris Mean Time (PMT), which was 9 minutes and 11 seconds ahead of GMT. In 1911, France turned its civil time back by precisely that amount to synchronize its clocks with GMT. However, rather than officially adopting GMT as its standard time, the country now proclaimed PMT-0:09:21 as the name of its standard time zone.

In 1978, after having advanced its standard time by 1 hour to Central European Time in 1940, France adopted today's UTC standard.

Should France Use GMT?

In terms of geography, GMT or WET, which share the same local time, should be the time zone of choice for France.