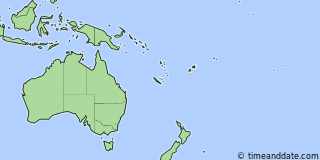 Norfolk Island is a self-governing territory of Australia. It is situated in the South Pacific Ocean, 1677 kilometers (1042 miles) north-east of Sydney. The island has one standard time zone and one corresponding DST time zone.

Time Zone Not Currently Being Observed in Norfolk Island

Norfolk Island standardized its time in 1901 to 11 hours and 12 minutes ahead of Greenwich Mean Time (GMT), then the world's time standard. Before then, the island used solar mean time, based on its longitude. In 1951, to get in line with the global standard, clocks on the island were turned forward by 18 minutes to UTC+11:30.

However, as the 30 minute time zone caused technical issues and on October 4, 2015, the government decided to set the clocks back 30 minutes to UTC+11 to line up with the mainland. The island then had the same time as Canberra, Melbourne, and Hobart when DST was in force there. During the rest of the year, it was 1 hour ahead.

The time zone on Norfolk Island is defined in the Standard Time and Daylight Saving Act 1974 and governed by the Minister for Community Services and Tourism. In 2018, the Norfolk Island Standard Time Amendment (Daylight Saving) Ordinance established Daylight Saving Time (DST). The DST period starts at 02:00 (2 am) local time on the first Sunday in October each year and ends at 02:00 (2 am) on the first Sunday of April in the following year. DST will come into effect for the first time on Sunday, October 6, 2019.