Equinoxes and solstices are a result of two things: Earth’s tilt and its orbit around the Sun.

Earth spins once a day on its axis of rotation, an imaginary line running through the North and South Poles. The spinning Earth orbits the Sun once a year, tracing out an imaginary disk called the orbital plane or ecliptic plane.

Compared to its orbital plane, Earth’s axis of rotation is tilted by about 23.4 degrees. This is referred to as Earth’s axial tilt or obliquity.

There are only two moments each year when neither pole points toward the Sun, and the Sun lies directly above Earth’s equator. These moments are the equinoxes.

On the date of the equinox, at any location, the lengths of day and night are roughly equal.

The farthest points from the equator where the Sun can appear directly overhead are referred to as the tropics.

The tropics are lines of latitude that circle the Earth above and below the equator, at about 23.4 degrees north and south. This angle is set by Earth’s axial tilt.

There are two moments each year when one of Earth’s poles is tilted the most toward the Sun, and the Sun lies directly above one of the tropics. These moments are the solstices.

Earliest sunrise not on longest day

Equinoxes and Solstices on Other Planets

Every planet in the solar system, apart from Mercury, is tilted on its axis of rotation. This means each planet has its own equinoxes and solstices.

Mars, Saturn, and Neptune have tilts similar to Earth’s: the values are 25.2, 26.8, and 28.3 degrees, respectively. At the equinoxes on Saturn, the planet’s famous rings appear edge-on as seen from Earth.

Uranus has an axial tilt of 97.8 degrees. This is close to a right angle, meaning the planet appears to lie on its side. Around the solstices on Uranus, the Sun is almost directly overhead one of the planet’s poles.

* Alternatively, because Venus spins in the opposite direction to most planets, its tilt can be given as 177.4 degrees. In other words, Venus can be thought of like it is spinning upside down. 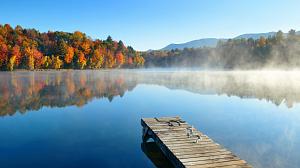 When Does Fall Start?

North of the equator, fall begins in September. Find out the exact dates for both hemispheres.