What Is a Blue Moon and When Is the Next One?

On August 30/31, 2023, a Blue Moon will shine brightly in the night sky. It is a monthly Full Moon—the second Full Moon in August. And no, it will not turn blue.

This is also a Super Full Moon, making it a Super Blue Moon.

When Is the Next Blue Moon?

Names of all the Full Moons in a year

The Full Moon on August 30/31, 2023 is the second Full Moon in a single calendar month, making it a monthly Blue Moon.

Why Is It Called a Blue Moon?

The historical origins of the term and its two definitions are shrouded in a bit of mystery and, by many accounts, an interpretation error.

Some believe that the term “blue moon” meaning something rare may have originated from when smoke and ashes after a volcanic eruption turned the Moon blue. Others trace the term's origin to over 400 years ago—folklorist Philip Hiscock has suggested that invoking the Blue Moon once meant that something was absurd and would never happen.

Origins of the Seasonal Full Moon

The definition of a seasonal Blue Moon, the third Full Moon in an astronomical season with four Full Moons, can be traced back to the now-defunct Maine Farmer's Almanac. According to the Almanac, the appearance of a 13th Full Moon in a year ‘upset the arrangement of Church festivals.’ The unlucky status of the number 13 and the difficulties of calculating the occurrence of such a Full Moon led to the extra Full Moon being named a Blue Moon.

We can thank the Christian ecclesiastical calendar for the reason why the third Full Moon of the season is called the Blue Moon. The calendar uses the phases of the Moon to determine the exact dates for holidays like Lent and Easter.

The month of Lent contains the final Full Moon of winter, Lenten Moon. The first Full Moon of spring—also known as the Easter Moon or the Paschal Moon—falls just before Easter. Naming the third Moon of the season as the Blue Moon ensured that Lent and Easter coincided with the right Moon phases, and other celebrations and customs would still fall during their “proper” times.

Is there a perfect calendar?

Origins of the Monthly Blue Moon

The more popular definition of the Blue Moon, that of the second Full Moon in a month, owes its existence to a misinterpretation originally made by amateur astronomer James Hugh Pruett (1886–1955) in a 1946 edition of Sky & Telescope magazine. The error took on a life of its own and spread around as fact. It even found its way into the answers of the 1986 version of the board game Trivial Pursuit! Today, this definition is considered a second definition of the Blue Moon rather than a mistake.

At timeanddate.com, you will find the dates and times of both seasonal and monthly Blue Moons in your time zone.

How Rare Is a Blue Moon?

For a monthly Blue Moon to take place, a Full Moon must occur at the beginning of the month. This is because the time between two successive Full Moons is approximately 29.5 days, just short of most months in the Gregorian Calendar.

Blue Moons that are blue are incredibly rare and have nothing to do with the calendar or the Moon's phases but are instead a result of atmospheric conditions. Volcanic ashes and smoke, water droplets in the air, or certain types of clouds can all contribute to a Full Moon taking on a blue shade on rare occasions.

The Moon can sometimes look red

Because of this, February, which has 28 days in a Common Year and 29 days in a Leap Year, can never have a monthly Blue Moon. Some years, February has no Full Moon at all, which is called a Black Moon. A February with no Full Moon happens when January and March have a Blue Moon each.

Seasonal and Monthly Blue Moons Together

In the same period, 21 years have Triple Blue Moons—one seasonal and two monthly Blue Moons in the same calendar year. The next is in 2143, while the last time was in 1961.

Two seasonal Blue Moons in a year is an impossibility, as that would require 14 Full Moons in the same year.

Not the Same Worldwide

The Moon reaches its various phases at specific moments. But because of time zones, the local time of a Full Moon can differ from one location to another. For instance, the Blue Moon in August 2023 takes place at 01:35 UTC on August 31. Locations in time zones that are at least 1:30 hours behind UTC, including New York City, Rio De Janeiro, and Vancouver, will see their Full Moon take place on August 30, 2023.

When's the next Blue Moon in your location?

The 3rd primary phase of the Moon, the Full Moon is the moment its disk is illuminated by the Sun's rays.

When is the next New Moon? New Moon is when the Sun and Moon are aligned, with the Sun and Earth on opposite sides of the Moon. 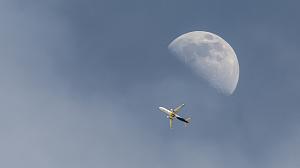 The 1st Quarter Moon is a primary Moon phase when we can see exactly half of the Moon's surface lit up. Which half depends on where you are on Earth.