April Is the Fourth Month of the Year

April is a spring month in the northern half of the world and a fall month in the southern half. It might be named after Aphrodite, the goddess of love.

What Is the Meaning of April?

Another explanation for the etymology of April goes back to Aphrodite, the Greek goddess of love, beauty, and procreation. The Etruscans knew her as Apru. Since the Romans inherited many Etruscan customs and myths, they celebrated the same goddess in April.

What Is April Fool’s Day?

On April 1, people in countries all over the world like to play pranks on other people. Depending on the culture, the victim of such a joke is known as a fool or a fish (poisson d’avril). It is not clear when the tradition started, and there are countless theories.

The likely answer why we play hoaxes on each other in April is because the winter is over: March and April end the long time of winter in the Northern Hemisphere and bring new life. In many cultures, this was celebrated with colorful festivities, dancing, and making fun of each other.

Earthshine Nights: The unlit part of the Moon sometimes becomes visible around New Moon. The best time in 2023 to see this phenomenon known as earthshine or Da Vinci Glow is on April 4/5 and April 26/27.

Pink Moon: April’s Full Moon is traditionally known as the Pink Moon because of the pink flowers (Phlox subulata) that bloom in North America during this time of year.

Lyrid Meteor Shower: The meteor shower is named after the constellation Lyra. The shower is expected to peak around April 22 and 23. The fireballs are created by debris from the comet C/1861 G1 (Thatcher)).

According to tradition, the birthstone for April is the diamond, representing innocence. Its birth flowers are the daisy (Bellis perennis) and the sweet pea (Lathyrus odoratus). 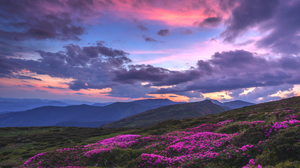 The Pink Moon is the Full Moon in April. It is also called Breaking Ice Moon, Budding Moon, Awakening Moon, Egg Moon, and Paschal Moon. When is the Pink Moon?