May Is the Fifth Month of the Year

May is a spring month in the northern half of the world, and a fall month in the southern half. It is likely named after Maia, the goddess of growth.

What Is the Meaning of May?

May comes from the Latin Maius, probably referring to the goddess Maia. She embodied the concept of growth, both in nature and in business. Others connect Maius with Maiores, the ancestors or “the greater ones.”

In May, the ancient Romans celebrated Floralia, a festival for fertility. Floralia lasted from April 27 to May 3 and included theater plays, dancing, and banquets. The Romans sacrificed a pregnant sow to the earth goddess Terra for a fruitful harvest.

Important Dates in May

Since ancient times, the beginning of May has been celebrated as the coming of summer—from the Roman Floralia to the Walpurgisnacht (Night of St Walpurga), a Germanic celebration with bonfires on April 30 still celebrated today.

Many countries in Europe and North America celebrate May Day on May 1 with dances around a maypole, a high wooden pole adorned with colors and flowers.

In many countries, May Day and Labor Day are both celebrated on May 1. Labor Day started as International Workers’ Day. It goes back to labor unions fighting for an eight-hour working day. After a bloody demonstration known as the Haymarket Riot on May 4, 1886, Chicago’s workers’ union started their yearly protests on May 1, 1889.

May 4 is Star Wars Day because the date, stated as “May the fourth” sounds like the well-known phrase from Star Wars, “May the force be with you.” The sentence first appears in Star Wars: Episode IV – A New Hope (1977). The characters say it to wish each other good luck.

Two years after the movie was released, the Conservative Party in the United Kingdom congratulated their candidate, Margaret Thatcher, for being elected Prime Minister. On May 4, 1979, they published an ad in a newspaper saying, “May The Fourth Be With You, Maggie. Congratulations.” This might have been the beginning of May 4 as Star Wars Day.

Cinco de Mayo means “the fifth of May” in Spanish. The day is observed in Mexico and in parts of the United States on May 5 and celebrates the defeat of the French army during the Batalla de Puebla (Battle of Puebla) in Mexico on May 5, 1862.

In the US, Cinco de Mayo is seen as a day to celebrate the culture, achievements, and experiences of people with a Mexican background. Businesses promote Mexican food, drinks, and music, and traditional symbols of Mexican life are celebrated.

Astronomical Events in May 2022

Earthshine Nights: The Waxing and Waning Crescent Moon phases in April and May are the best time to see earthshine, where the unlit part of the Moon becomes visible. It is also known as Da Vinci glow.

Eta Aquarid Meteors: On May 5, 2022, you have a chance to spot the shower that is named after the brightest star of the constellation Aquarius (water bearer), Eta Aquarii. Use our handy Interactive Meteor Shower Sky Map to increase your chances of meteor spotting.

Flower Moon: The Full Moon of May is known as the Flower Moon, named after the blooming flowers in the Northern Hemisphere, where these traditional Full Moon names originated.

Total Lunar Eclipse: The total lunar eclipse of the Flower Moon will be visible from North and South America, Europe, Africa, and parts of Asia on May 16, 2022.

In the old Roman calendar, May was called mens maius and was the third month because the year started in March. In the year 154 BCE, a rebellion forced the Roman senate to change the beginning of the civil year from March to January 1. With this reform, May officially became the fifth month in the year 153 BCE.

May Birthstone and Birth Flowers

According to tradition, the birthstone for May is the emerald, representing love and success. Its birth flowers are the lily of the valley (Convallaria majalis) and the common hawthorn (Crataegus monogyna), also known as mayflower or maythorn.

Zodiac Signs in May 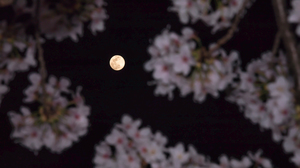 The Full Moon in May is known as the Flower Moon or Full Flower Moon. Other names include Milk Moon and Hare Moon. What is the meaning behind these names?