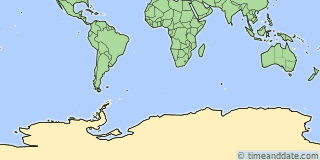 Note: Only some parts of Antarctica used DST in 2010.

Sunrise and sunset were about 1 hour earlier on Apr 4, 2010 than the day before. There was more light in the morning.

Sunrise and sunset were about 1 hour later on Sep 26, 2010 than the day before. There was more light in the evening.